The Real Estate Investment Network has recently released their Top 10 cities in Ontario that have the most potential for housing market strength over the coming five-year period. Barrie was ranked 4th, showing strong potential for the coming years.

In the report, REIN highlights the growth Barrie has consistently seen over the last two-decades. REIN also notes the upcoming condo developments that are coming to Barrie’s downtown, which will revitalize Barrie’s downtown core. Barrie was also shown to have the second highest rate of home ownership in a census metropolitan area in Canada.

According to the report, “Barrie has seen rent increases in the neighbourhood of 4.6 per cent. Rent for a one-bedroom apartment was averaging $1572”. REIN also found that inventory is continually going up, while sales have been going down, which indicates there should be a greater balance in the market in the coming year.

• The median household income is just over $91,000 which exceeds the national and provincial averages
• The median age is one of the youngest of REIN’s Top Ten Towns and Cities at 38.5
• There are incentive programs a landlord could take advantage of to receive either a loan or a grant to provide either student housing or affordable housing
• Metrolinks is adding more trains and more weekend service to the GO Train system that whisks Barrie residents to Union Station in downtown Toronto

Barrie has been consistently ranked as one of the best places to invest in Real Estate in Ontario, and at BarrieInvesting.com we couldn’t agree more. If you would like to learn more about current investment opportunities in Barrie, contact our team today! Matt 705-739-3432 or Dom 249-877-7785. 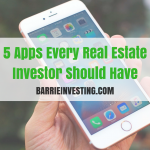 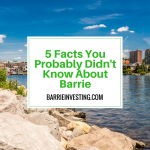